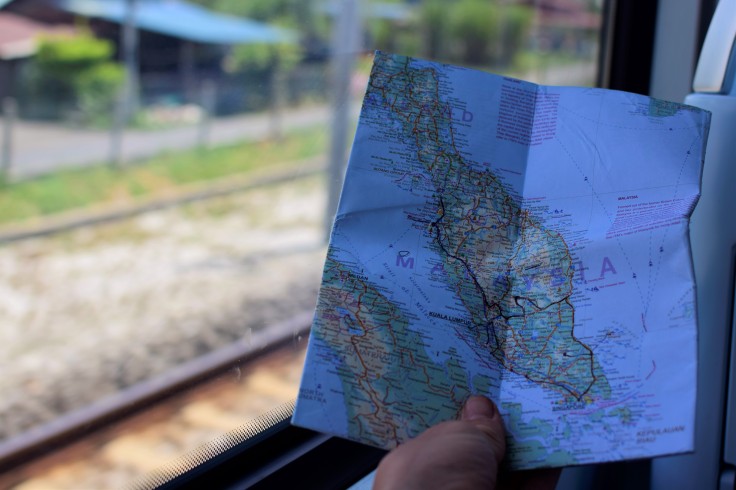 It was a slow day in the beginning. A good simple breakfast at the market and a bit of a walk to wake up. I was heading to Thailand, I didn’t know how or where exactly. Its not much of a thing to know really, its not enough information to put my finger on just knowing the name of the country I’m going to (I also knew it was north of where I was).
Before heading out the door of the hostel at around 10:30 I asked the owner and got a tangent involving information that I later used to find my way to the ferry and train on the other side.

Why are we going backwards? I was thinking as the train seemed to start its journey south, not north like I had planned. It left me sitting facing the wrong direction so I could only see backwards, I don’t know why but I keep tending towards letting things happen the way they are heading since I’ve been traveling. So I stayed facing backwards, leaving my future to be discovered only after I had past it. It was so easy and comfortable with Tom and Jerry playing in the background and the air conditioning keeping the temperature a degree above shivering. I was quickly lulled into a unconcerned mindset.

“Where you go?” a man said just before the Thai border. I told him I needed to change my money and go to Thailand and he said  a few words with “motorbike” and ” 3 Ringgit” somewhere in the sentence. I agreed and in several seconds I was zooming along on a motorbike feeling mildly terrified, a couple stamps on my passport and than I was zooming away down the road. He gave me a helmet for the first 5 second journey and than forgot to give it to me on the next two short journeys but it didn’t seem important when I knew nothing would keep me in one piece if an accident did happen.

Sometimes its easy and sometimes its not. Sometimes traveling is so easy, so cheap and so good that it feels like nothing could be hard and than it is, sometimes very hard, and dark, confusing. Sometimes you find yourself standing on an unknown street with unknown dangers in the middle of the night unable to communicate. It could be scary or exciting or humorous.
It was all three for me after hours of not knowing where I would sleep that night or if I would sleep. The bus had broken down, the new bus that was brought had a new driver that dropped me 30k away from where I needed to be and than where I needed to be was still too far to safely walk at night. Smith Zen  to the rescue, he was a young local guy with a smart phone who knew a few words in English and was kind enough to delay his journey home to help a very confused and tired backpacker. I don’t know if I would have been okay without his help.
It feels so weird to need help and not even know the words to ask for it, its hard enough in English but it makes me thankful that people are so similar. Everyone needs to sleep, a man with a fruit stand helped me find a motorbike that took me to a hotel, he spoke no English at all but he understood when I put my head to both my hands and closed my eyes miming sleeping. I ended up riding three to a motorbike looking for a hotel at 12:30am, it was one of those moments when you have to go forward, there is no stopping. I just had to ride it out, its like reading a story that’s only partly yours and the only way to find out what happens is to take another step. I began to be very thankful for my sense of humor during the nights adventure, there are many attitudes to have when its not easy but I find that being able to find the hilarity in a tough time smooths the transition into acting. Its harder to act when you feel stupid, its easier when you can laugh at yourself and take another possibly foolish step forward.